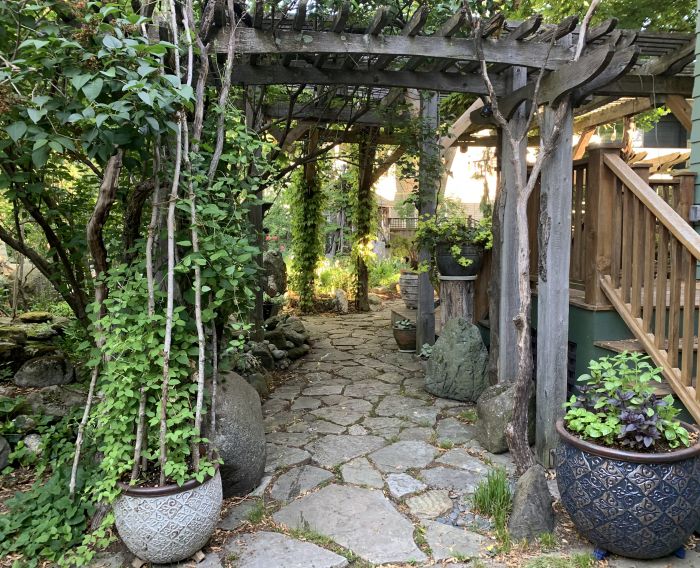 DarkMatterPark is, in the literal sense, simply a large garden. It is a place & environment, an opportunity to perambulate rather than an item or an object that might be taken away. Current manifestation is due to 20 years of the subtracting and adding of huge amounts of material to a landscape. When a vast field of asphalt is gone, Shrubbery can happen. And did, but also much more. Change is constant.

From a less traditional viewpoint DarkMatterPark resembles an umwelten, which is a shared "Umwelt" or a surroundings for an organism, in this case for the multicellular organism, Human. Here are two Humans with differing perspectives overlapping, just once in a while collaborating on a vision. We conceived, assembled, built, honed and truly argued the garden's construction over time. Mostly, parallel play went on. The curve did ultimately defeat the line; but the raw and roughcut outmanoeuvred the fastidous in some shared Wabi-Sabi clarity. The duel for space goes on & is frequently epic, disturbing.  Long ago the color red became forbidden and then was, just recently, re-allowed. Frequently enormous rocks get strewn here or possibly heaved & grunted into place.

Why would anyone do this? Why construct an umwelt in this way not that? What are people wanting out of such ardour? Perhaps there is an inevitability about it?  Does such extreme toil at gardening verge toward or end at Art?  It is something worth arguing about, worth endeavoring it seems. Plausibly, all the soil, rocks & the stuff of plants, ponds, fish, & countless microorganisms that have passed through our hands over time have adjusted us essentially. Perhaps during these many years they have changed us so entirely that it is they who are influencing us to Make this place for them.

And then there are the many birds...worth the effort, the whole of it.