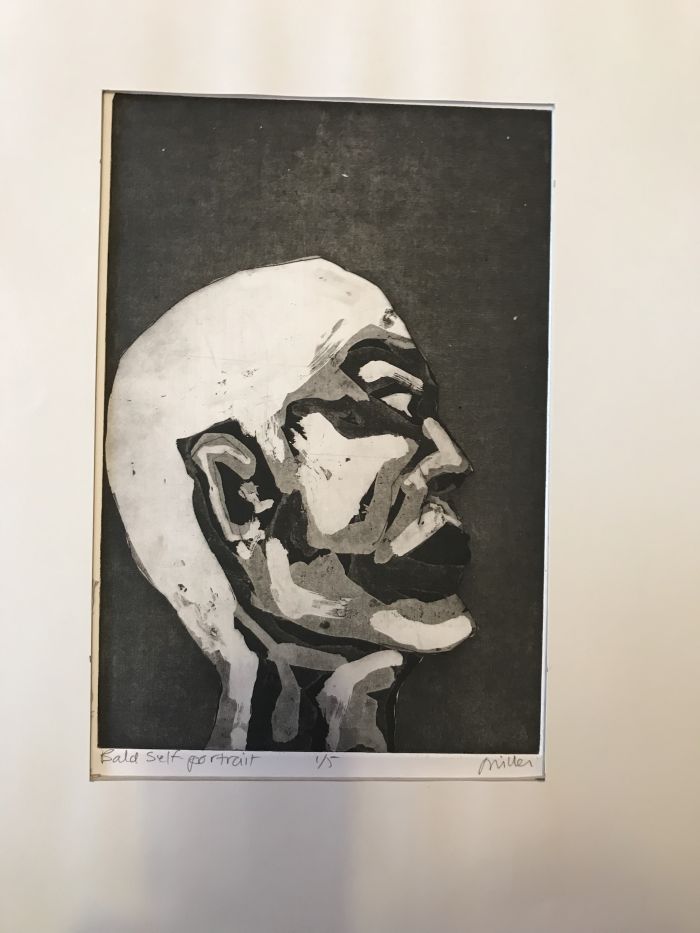 I've been doing prints at Mixit Print Studio for I guess more than 25 years. At first I did etchings and woodcuts based on the bizarre creatures in my Victoria's Secret catalogs. After awhile I started having some mysterious medical issues, which were eventually diagnosed as kidney failure caused by a rare disease called amyloidosis, and my subject matter changed accordingly. The horrors of dialysis; the apparent belief on the part of some medical professionals that their only goal was to keep me breathing in and out, and that any thought that I might want to have any sort of meaningful life was just silly and irrelevant; the bald self portraits I did after the bone marrow transplant I had to get rid of the amyloidosis that caused all the trouble in the first place--this became my subject matter now.

I also did a lot of reading about kidneys and the history of treatments for kidney disease. Any of you who saw the mixed media pieces on my video on this website last year know how disturbing it was to realize how very recent was the time when I would have been just left to die. You also know that, after many years of dialysis, I got a kidney transplant in November of 2019. When the pandemic came along, my life was just starting to get back to normal, and now here we are.

The etching studio was closed for awhile at the beginning of the pandemic, so that part of my life was put on hold. I figured maybe I could paint instead. Way back when I was in college I majored in printmaking but also did a lot of painting. Since graduation, though, I've pretty much ignored painting. But I decided to see what I could do. I started off with a painting of the flowers I would give my kidney donor if she were still alive, with a small sort of self portrait up in the corner presenting them to her. I kind of liked that and continued in that vein, now combining flowers with faces based on my old Victoria's Secret etchings and woodcuts. I like the juxtaposition of the fairly straightforward flowers with the faces that are somehow a bit off--I'm not sure why, but that's what I'm still doing. And the etching studio is open again, so I'm back there as well.