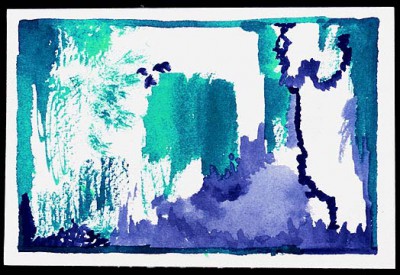 Carol Moses is an artist who creates non-representational tableaus. She employs grids, patterns, repeated linear elements, and biomorphic forms, to create a distinctive visual vocabulary. Her often-sober titles belie lively compositions and dynamic use of color. Discrete styles namely calligraphic, gestural, and geometric appear throughout her omnivorous practice that moves between drawing, painting, printmaking and photography.

At a young age Moses gravitated towards logic, math and science, rejecting artistic and symbolic enterprises. Instead she studied the nuance and minutiae of her surroundings finding patterns in the natural world. She studied cultural anthropology and linguistics, which tacitly influenced her sui generis style that emerged as she began to experiment with painting in adulthood.

Moses began painting with watercolor which she embraced for its material properties (both viscous and fluid) which disavow indecision or revision. By eliminating mediation or analysis the work becomes purely formal constellations unlinked from personal or political histories. Yet, watercolor in its endless mutability also allows the artist to convey a wide range of emotional states and perspectives. Although small in scale these focused compositions recall Helen Frankenthaler’s canvases in their methodology, and concentration on a centralized mass often foregrounding white space or emptiness. But, whereas Frankenthaler's expansive canvases often conjure landscapes, Moses’ tightly composed images create intimacy, evoking interiority. Her work is a means of externalizing an internal state. This ability to transcribe sentiments which are at once subjective and objective is one of the qualities that makes these works both evocative, and universally legible.

Some of the gestural and expressionist qualities evoked by the Abstract Expressionists can be seen in Moses oil paintings which tend to move outward, employing a more allover compositional strategy. They, as well as the watercolors, also recall the work of Expressionist painters Wassily Kandinsky and Paul Klee who used color and shape to create rhythm and balance, prizing stillness over movement, contemplation over emotion. In Moses’ oil paintings, oil stick on paper and canvas, color is employed compositionally throughout, as a means of creating balance and order. This technique is also similar to Robert and Sonia Delaunay’s Simultanism which depicts ‘simultaneous contrast’, a means of describing the effect colors have on one another within an arrangement and their ability to produce a complex poetic language removed from formal concerns.

Although Moses’ work is principally strongly-colored painting, she also makes small-scale black and white drawings and another genre she calls word-paintings. These quick focused works on paper have their own singular approaches, in the case of the drawings in their use of line and form, and with the word-paintings in their emotional responsive tone.

In the last decade, the artist embarked on a long-planned series of photographic portraits inspired partly by Felix Nadar’s unvarnished studies of his contemporaries. In the final installation, these portraits are accompanied by text in the form of hand-picked responses from around thirty interview questions. The product becomes a composite, generating a rich impression of the sitter in a specific time, and context through Moses’ unique lens.

Moses’ work represents a turn inward towards a mental landscape, a refusal of narrative and a freedom from a signature style. She provides the viewer with small, intimate interpretations of complex emotions and occurrences events (personal, biological, or historical) and translates them into color, form and essence. Her artistic work creates balance, moving through color and form to create a visual neologism all her own.