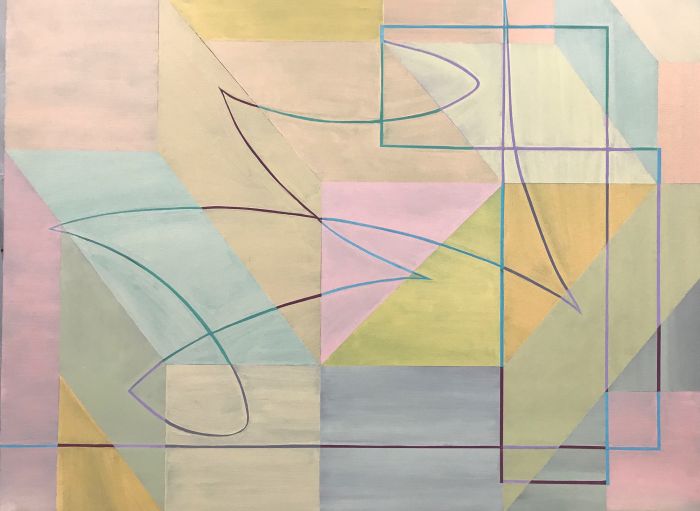 Painting
Artist's Statement:
The Rule of Triplets There are an infinite amount of ways that each piece can be read. The order one can read them, intrinsic to the viewer, is ultimately what the viewer will gain from the work. I have intentionally chosen not to mark the canvas with extraneous information, but rather to use only the simplest descriptive forms. The triangle, as a two dimensional geometric form, remains the purest example. There are no geometric shapes with less than three sides. I refer to any shape with a curve as an organic shape, not a geometric shape. I use the square, or four-sided shape, often as I view the square as either two triangles, or the base of the simple three dimensional shape, that of a cube. At first glance it seems that I use illusion only when describing three-dimensional shapes. I am using illusionary techniques, but I feel that this is not the true, or central, illusion within the work. Two-dimensional shapes do not and cannot exist in realty. Even when rendered, there is a thickness to the shape, to the paint, to the graphic contour, etc. I use techniques to make certain shapes appear to be hyper flat. In doing so, I am creating an illusion of what cannott exist according to physics and mathematics. When I am describing an emotionally charged experience, I use shapes that don't exist in physical reality, but make no mistake, this does not preclude them from existence. They exist in the realm of human Intellectual emotional experiences---within the ether of consciousness. I have come to term my approach to painting as the rule of triplets. It is loosely based on the use of triplets in music, though I take this concept to a higher level. In the fine arts, an appreciation for the beauty of mathematics is often overlooked and under incorporated. I have purposely employed my innate talent (and love) of math into the spatial breakdown of my compositions. This rule of triplets is a co-factor in the reason for the majority of the elements in my work to be triangles and squares. The square fits two triangles evenly into it; this applies to the cube and other illusory, three-dimensional shapes. You might notice my compositions exist within a square matrix, yet the square has three distinct visual layers. 1: the compositions of geometric 2: the organic 3: the lens or filters, often seen as the drastic value and chromatic changes. I deny the existence of negative space in my work. Negative space within a work is a waste of space. When I see (what others label) negative space that is beautiful, meaning it speaks to me, then it is not truly negative space, is it? When I have a concept for an image, and there is a break in the language, I adjust the size of the canvas, or the element within the canvas, to maximize the amount of positive information that can be conveyed. The artist Jackson Pollack famously said, I do not make mistakes, I deny the mistake. To his point, a study found when asked which sounded better a drummer or a drum machine playing the exact same thing, most people, without knowing which was which, chose the drummer. They chose the man over the machine because the slight mistakes made by the drummer and imperceptible errors created a richer, more organic sound. Perfection, by definition then, is dependent (however counter intuitively) on imperfection or on our humanness. Through my approach using the rule of triplets, I too deny the mistake, as their are no mistakes, only an addition of human elements, as they speak to a deeper beauty. This can be seen when I paint a straight line, or a perfect square. What may seem like errors in my straight line or perfect square are not errors at all, rather, they are gestures meant to remind the viewer of the artist; me, painting with my own brush---elements of true humanity on the canvas. 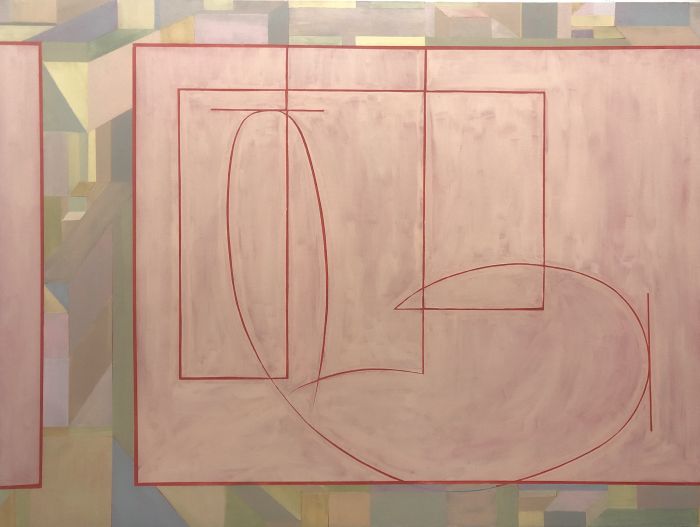